James Demint, the Founder of Springfield

James Demint, with his family, came from Kentucky the same year. The bluff overlooking the beautiful Lagonda appeared to him a more favorable location than the Mad River bottoms, where the Humphreys settlement had been formed. He built the first log house within the present limits of the city. It was a large, double log cabin, and stood for many years on the brow of the hill on the north bank of the Lagonda, on the west side, and near the State road, now Limestone street, leading to Urbana. The present Northern School building, formerly the Seminary, is near the site of this cabin. Mr. Demint entered and held by certificate from the Government a large tract of land south and west of his new home. This he afterward laid out into town lots, which are embraced in the first plat of Springfield, and is here given:

ORIGINAL PLAT OF THE TOWN OF SPRINGFIELD 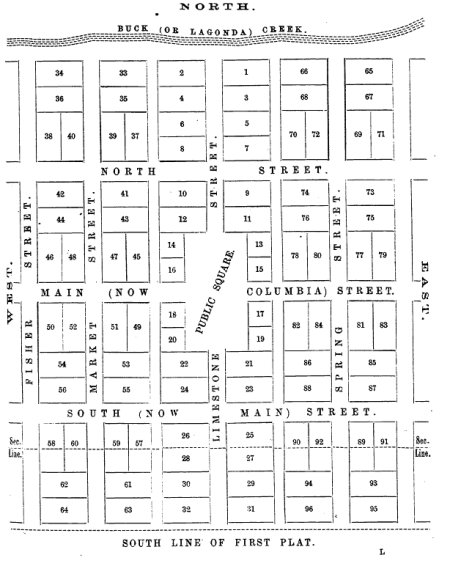 The surveyor who laid out this plat was a young man named John Daugherty, who was then temporarily stopping at Demint's cabin. He commenced the work March 14, 1801. The intention had been formed by Demint to lay out a town on the slope facing the bluff, on which the proprietor had located his cabin. The plat as shown here indicates his purpose to have the center of his town midway of the slope, which he has designated on the plat as the public square. The principal streets ran parallel with the Lagonda Creek. Columbia street was at that time the principal thoroughfare, or Main street, and what is now Main street was then known as South street. Subsequent developments, however, pushed the center of trade south, and the adoption of South street as the line of the road from Springfield to Dayton established that street as the Main or business street of the place.

When Daugherty began this survey, there was some trouble about finding a starting-point, as the Government survey had not yet been completed. He finally determined to go down to the range line running between Ranges 8 and 9, and measure due north a distance of four miles, which would fix the position of the Government section line when it should be run by the Government survey. This brought him to about where the line of High street now is, and from there the new plat was laid off, and is dated March 14, 1801.

Some time after this, probably in the fall of the same year, Israel Ludlow, as Government Surveyor, established the present section line between Sections 34 and 35. This line passes through the open alley which runs between the First National Bank and the new commercial building on Limestone street, and is two hundred feet, more or less, farther north than the south line of the town plat as located by James Demint. In short, two surveyors, each measuring four miles in the same direction, made a difference of about two hundred feet in the result of their work. It is needless to add that the last line was the true one, because it was one of the great system of lines by which this county was divided, though the experience of every surveyor from then until now is that the first measurement was very nearly correct, while the Ludlow surveys generally overrun, both in distance and quantity. There has been, therefore, a dispute as to the exact locality of these lines, but the statement here given may be regarded as authentic.

The public squre as designated in the plat, and now occupied by the court house, county buildings and Soldiers' Monument, was intended as an open space, the center of the future city, but the wishes of the founder in this respect have not been observed, and the lots have always been occupied to the street. The recorded plat is dated and signed by James Demint September 5, 1803, and was recorded in Greene County September 13, 1804, it being then included in the limits of that county.