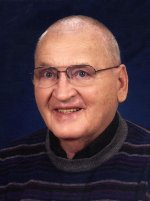 He was born March 9, 1927 in Goshen, Indiana the son of Asa B. and Martha E. (Ferrell) Turner and lived in Springfield all his life.

Mr. Turner graduated from Springfield High School, served in the United States Navy during WWII and earned his Bachelor's of Education Degree from Wittenberg in 1951. He retired from Springfield City Schools in 1982 with over thirty years service. Robert was a lifelong member of Grace United Methodist Church.

Friends may call Monday from 5-8 PM. in the RICHARDS, RAFF & DUNBAR MEMORIAL HOME and for one hour prior to services in church. Funeral services will be held Tuesday at 10:30 AM. in Grace United Methodist Church with Rev. Robert Scott officiating. Burial will be in Glen Haven Memorial Gardens.

In lieu of flowers memorial contributions may be made to Grace United Methodist Church, 1401 West Main Street, Springfield, Ohio 45504.