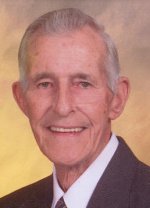 He was born February 9, 1927 in Hazard, Kentucky, the son of Thomas and Callie (Price) Thacker.

He was a faithful and devoted member of Medway Baptist Church. Clyde served his country in the United States Navy during WWII. He was retired from Chrysler Airtemp in Dayton.

He was preceded in death by his parents, wife Sylvia "Louise" in 2001; two sons, Ricky and Jimmy; five brothers and two sisters.

He was loved by everyone who knew him and will be greatly missed.

A gathering of family and friends will be held Friday from 5 p.m. to 8 p.m. in the LITTLETON & RUE FUNERAL HOME, where funeral services will be held at 10 a.m. Saturday September 13, 2008, with Pastor Melvin VanSickle officiating.

Burial with military honors will be in Rose Hill Burial Park.