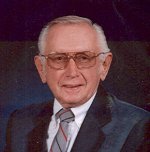 He was born in Glen Cove, New York on March 6, 1933 the son of the late Victor Adolph and Sophie Anna (Weinlein) Novell.

A gathering of family and friends will be held from 6-8 p.m. Friday in the LITTLETON & RUE FUNERAL HOME.

A Mass of Christian Burial will be held at 11:00 a.m. Saturday in St. Teresa Church with Fr. Edwin F. Gearhart officiating.

Burial will be in Ferncliff Cemetery.

The family would like to express their deep appreciation to the doctors and staffs at Miami Valley Hospital, Mercy Medical Center and Villa Springfield for their care during Vic's illness.

In lieu of flowers, memorial contributions may be made to the Shriner's Children's Hospital, 3229 Burnet Avenue, Cincinnati, OH 45229-3095.