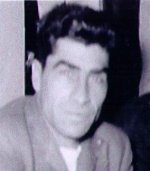 James Nichols, 84 years old, of South Vienna, passed away peacefully at home Sunday, February 15. He was born February 21, 1924 in Springfield, Ohio, the son of Steven and Clara (Stultz) Nichols.

He was a retried self employed W. W. II Veteran who served in the Army-Airforce. He enjoyed fishing, boating and playing euchre.

He was preceded in death by his parents, his sister; Pauline Raver, brothers in law; Norman Stroup and Jack Raver and nephew; Jimmy Stroup.

Funeral services will be held at 11:00 AM Thursday in the JONES-KENNEY-ZECHMAN FUNERAL HOME with Rev. Gene Kelly officiating. Visitation will be held for one hour prior to the services. Burial will follow in McConkey Cemetery.