From Directory of the City of Springfield
John W. Kees & Co., Springfield. 1852

O.C. HIGH SCHOOL — The present High School building was erected in 1834, by subscription of the citizens, each subscriber owning a certain share according to the amount subscribed. The building is a large and substantial edifice, three stories high, situated on High street, on an eminence commanding a fine view of the town and surrounding country. In November following, M.G. Williams took charge of the school, in whose care it continued for several years. During the winter of 1840-41, this institution passed into the control of the Ohio M.E. Conference, under whose superintendence it was opened by Rev. Mr. Gonzales. He was followed by Rev. C. Robbins, present pastor of the Episcopal Church. Mr. Robbins was followed by Rev. S. Howard, who was assisted by E.G. Dial, Prof. of languages. Soon after Mr. H. became the principal, the school was divided into two departments — male and female — both occupying the same building. In 1849, Mr. Dial resigned his professorship, and Rev. Thomas Harrison was appointed in his place. The following are the names of the present faculty: Rev. Solomon Howard, A.M., principal, and professor of mathematics and ancient languages; Rev. Thomas Harrison, professor of natural philosophy, chemistry and English branches; Mrs. louisa Mullikin, preceptress, and instructress in French; Miss Sarah Brescup, teacher of music on the piano; Miss Martha Martin, teacher in prepatory department. "The institution, under its present organization, has been steadily advancing during the last six years, and its present condition is highly encouraging and full of promise."

WITTENBERG COLLEGE was chartered by the legislature of Ohio, in the winter of 1844-5, and is located on a tract of land of twenty-five acres, lying north of Springfield. "It has an elevated site, supplied with good water, finely shaded by sugar and other forest trees and presenting a fine landscape in every direction." The grammar school of this institution was opened in the basement of the Lutheran Church, November 3, 1845, under the superintendence of the deceased and lamented Rev. Ezra Keller, D.D., (who was the founder of the institution,) assisted by J. Welty, professor of mathematics, and P.G. Sauerwein, professor of languages. The number of pupils present the first day was eight, which increased to thirty-six before the session closed. The first public exhibition of the students was on the evening of April 7, 1846, in the Presbyterian Church. In the summer of 1846, the east wing of the college building was erected, and in 1850, the main college building with the west wing, was built, and the edifice now stands complete — a magnificent structure. There are two literary societies connected with this institution — one, the "Excelsior," organized November 20, 1845; the other, the "Philosophian," organized July 4, 1846. These societies are each possessed of a neatly furnished hall in the college building, and each a library of two or three thousand volumes, for the use of its members. The different libraries of the institution contain about eight thousand volumes. The institution is now well supplied with cabinets, and various chemical and philosophical apparatus, and its prosperity under its present talented and efficient faculty, is truly encouraging.

FEMALE SEMINARY — For a number of years prior to the location of this institution, there were select schools for females, kept by different teachers at different times. Among the first who held a school of this character, was Miss Eunice Strong, as early as 1831. But the present female seminary was located in Springfield in the fall of 1848, by the Miami Presbytery of the Presbyterian Church. The school was commenced under the direction of Rev. J.F. Sawyer, in September of this year. A charter was obtained from the legislature in the winter of 1848-9. In December, 1848, Rev. J.F. Sawyer, in consequence of ill health, tendered his resignation, and in February, 1849 Rev. Jonathan Edwards took charge of the school, and continued his connection with it until August, 1851, when he resigned, having received and accepted a call from a Presbyterian Church in Fort Wayne, Indiana. The present principal is J. Allison Smith, formerly principal of an academy in Lebanon, Ohio. During the past year, an association was formed to purchase a site and erect a building for this institution. This company bought of Dr. Rodgers four acres of the beautiful premises on the north side of Buck creek, near the Urbana road, where they have commenced the erection of a handsome edifice, which they contemplate finishing in time for the school to enter at its next fall session. The school is now in a prosperous and flourishing condition, with bright prospects for the future.

GREENWAY BOARDING SCHOOL FOR BOYS — The cut in the front part of this book represents the building recently erected for, and now occupied by this school. The proprietor and instructor is the Rev. Chandler Robbins, A.M. The school was commenced by him about four years since, and has been in successful operation ever since that time. The number of pupils is limited, and all must board in the family of the instructor. The following extract from the last annual circular will show the design of the school, and its peculiar character. "The plan was adopted by the proprietor, in order to counteract what he deems a serious error in the ordinary modes of education. The cultivation of the intellect alone appears, in general, to be regarded as education. To this one object, almost the entire attention of teachers in our larger schools is devoted. Human happiness depends not so much upon mental acquisitions, as upon the physical health, the moral character, and the proper cultivation of the affections. The mental discipline of youth, is attained but too often at the expense of health and morality. The attachments of home are frequently made, in large schools, a subject of ridicule; and the minds of the young are impressed with the idea that to acknowledge and obey maternal influence is unmanly.

The Greenway School was designed to remedy this evil. Its purpose is to throw a safeguard around those who enter its precincts, during the important period in which their faculties are most rapidly developing — to cherish in them domestic affections — to combine in their training the advantages of systematic school discipline, with the gentle and refining influences of home education, and the promotion of a healthy physical development."

The buildings are beautifully situated, on an eminence east of the town, about three-fourths of a mile from the Anthony House. The grounds are ample. It is the design of Mr. Robbins to introduce so much of military discipline in his present plan as shall secure regular and healthy exercise, order, system and subordination. 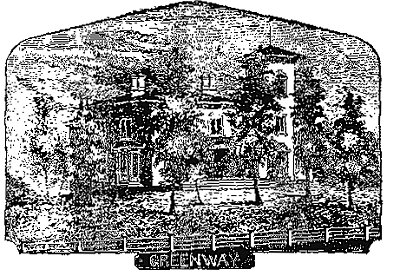 Springfield is also supplied with ten common schools, which are numerously attended and well conducted; but she still lacks suitable school houses.